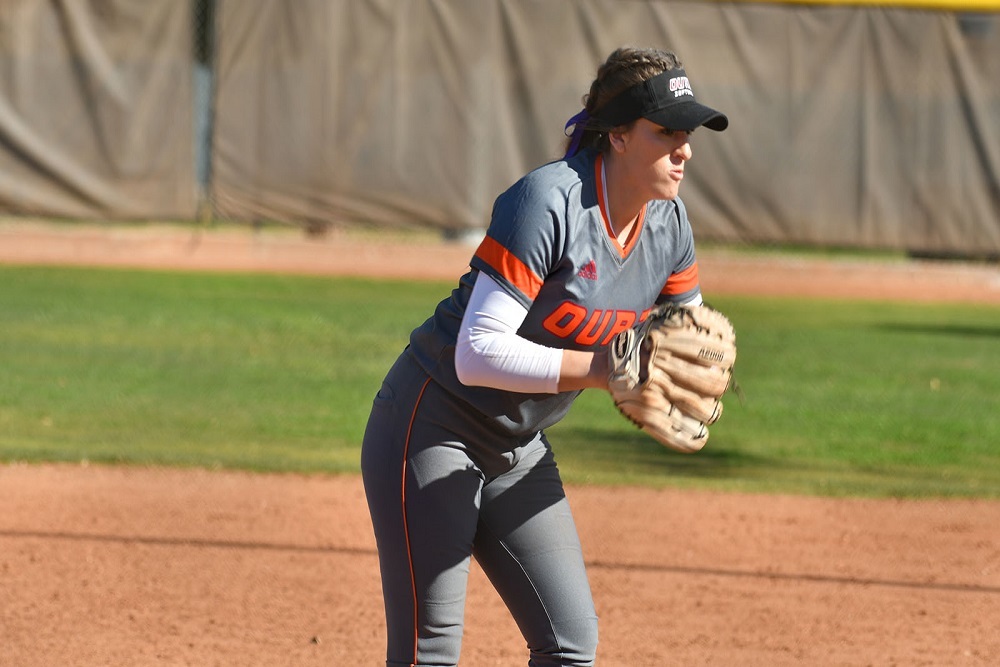 The OUAZ softball team opened its season with a pair of games against Taylor College. The Spirt are infusing a lot of new talent in with a good group of veterans this season, and the results were mixed in the first games of the year.

The Spirit put up a pair of runs thanks to an Andrea Rhinehart two-RBI single, and the Spirit slowly increased its lead from there. Heliana Bueno drove in Mashayla Beltran in the third, and OUAZ scored another on two errors in the fifth. Samantha Miller came around on another error in the sixth to put the Spirit up 5-0 heading into the final inning.

Taylor threatened with a couple of runs in the seventh, but Bailey Coronado got out of the jam to secure the 5-2 victory. Coronado was outstanding, allowing only six hits and two runs (one earned) for the complete game win. She also struck out five batters and did not allow a walk.

The freshmen led the way for the Spirit, as Rhinehart drew two walks to go along with her two runs batted in. Beltran went 2-4 as well in her collegiate debut.

OUAZ got a chance to look at its other pitchers in the second game Saturday afternoon, as Alexandra McCutcheon took the circle to start the game. She had a rough go of it, as she gave up five runs in two innings, though none of them were earned.

Phoebe Popplewell went the next 3.1 innings, being charged with the only three earned runs to go against any OUAZ pitcher in the game. Bailey Coronado came in to finish the final 1.2 inning for OUAZ, allowing only one run (inherited, unearned).

The Spirit put up seven runs of its own, as five different players drove in a run. Rhinehart got on base via the hit in this game, going 2 for 5 and scoring a run. Jada Cruz went 3 for 4, and another freshman Rachel Stockseth went 2 for 3 with an RBI as well.

The Spirit will get back on the field next week with four games in the Spirit Classic. They will play College of Idaho and Park-Gilbert four total times between next Thursday and Friday. The first game for the Spirit next week is scheduled for 12:30pm at Willow Canyon High School.