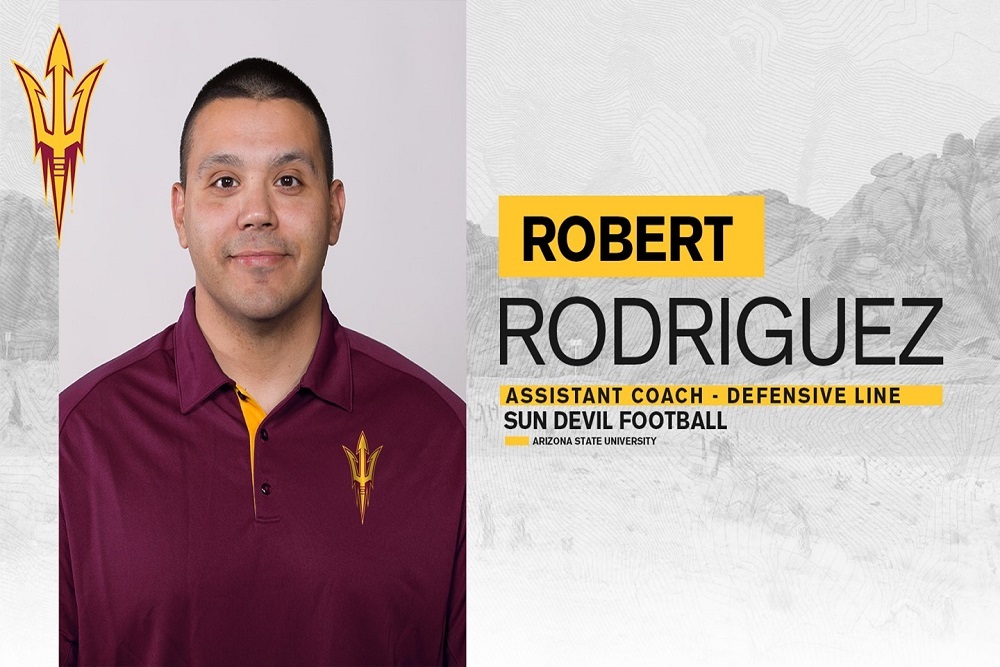 Rodriguez completed his fifth season with the Vikings in 2019, serving as the team's Assistant Defensive Line coach. Rodriguez worked closely with veteran defensive line coach and co-defensive coordinator Andre Patterson in their fifth season together with the Vikings. Prior to that, Rodriguez served as the linebackers coach for seven seasons at the University of Texas-El Paso.

"Robert Rodriguez has established himself as a strong up-and-coming coach at the highest level of football and has worked within one of the most dominant defensive organizations of the past several seasons in the Vikings," Edwards said. "But he also has numerous years of collegiate coaching experience and I feel strongly that the combination of his professional and collegiate coaching abilities will prove to be a vital asset along our defensive front."

"My family, my wife and I are ecstatic for the opportunity to go to Arizona State to work with best staff we could ask for," Rodriguez said. "Getting the opportunity work with Herm Edwards, Marvin Lewis, Antonio Pierce and that caliber of coaches is one of the reasons that we even looked outside the National Football League. We are all in. Once we got there and saw what they're trying to build, we knew that this was the place that we wanted to be."

The 2018 Vikings ranked fourth in NFL total defense and fourth in scoring defense, the third-straight season finishing in the top-five of both categories. The team led the NFL in third-down defense for the second straight season, limiting teams to 30.5 percent on conversions attempts. The Vikings talented defensive front played a key part in the performance. The unit was led by Hunter, whose 14.5 sacks were a team-high and he earned his first career Pro Bowl berth while being named a Second-Team Associated Press All-Pro selection. Hunter's breakout season spurred a defense that recorded 50 sacks, the most under head coach Mike Zimmer and tied for the third-most in team history. The defense set a franchise record with 10 sacks vs. Detroit (11/4) and followed up later in the season with nine sacks against Miami (12/16).

In 2017, the defensive line once again provided a lethal pass rush that rattled opposing quarterbacks and stopped the run at an impressive rate. Defensive end Everson Griffen (third honor) and defensive tackle Linval Joseph (second honor) earned trips to the Pro Bowl for the second straight year while Griffen also received his first All-Pro honor (second-team). The defense finished out the regular season ranked first in total and scoring defense, allowing just 15.8 points per game and 275.9 yards per game. Joseph was crucial in stopping the run as the Minnesota defense surrendered just 20 runs of 10+ yards, tops in the league and tied with the San Francisco 49ers in 1995 for the fewest since 1991. Griffen began the year with a sack in each of the team's first eight games, tied for the longest streak to start a season in NFL history, and helped hold opponents to a 25.2 percent 3rd-down conversion rate, best in the NFL since 1991.

The Vikings defense ascended to No. 3 3 in the NFL in 2016, powered by strong and consistent play along the line. The Vikings ranked tied for fourth in the NFL with 41 team sacks, 34 of those coming from the defensive line, which was the second-most as a unit in the NFL. The line was represented at the Pro Bowl by Griffen (second honor) and Joseph made his first appearance. Joseph notched 100 tackles on the season and second-year player Hunter led the club with 12.5 sacks, putting him in a tie for 3rd in the NFL. The Vikings defensive line accounted for two touchdowns and a safety with Hunter returning a fumble for a a touchdown and notching the safety and Griffen returning a fumble for a score. Griffen was named NFC Defensive Player of the Week for his game at Carolina (9/25) when he had a season-high 3.0 sacks.

In 2015, Everson Griffen led the team with 10.5 sacks (4th in NFC) on his way to his first career Pro Bowl. Hunter, a third-round selection out of LSU, ranked second in the NFL for sacks by a rookie with 6.0. He posted the second-most sacks on the Vikings and fifth-most by a rookie in team history. Nose tackle Linval Joseph was a dominant force in his second year as a Viking, and he led the line with 71 tackles. Joseph (Week 9 vs. STL) and Griffen (Week 17 at GB) earned NFC Defensive Player of the Week honors. Hunter was named to the All-Rookie team by the PFWA. The DL accounted for 30 of the 43 team sacks during the regular season. Only 5 RBs reached 100+ rushing yards in 2015. The defense ranked fifth in the NFL only allowing 19.3 points per game.

From 2008-14, Rodriguez would coach the LBs and special teams at his alma mater, Texas-El Paso.

During the 2013 season, the Miners' special teams unit was sparked by Autrey Golden, who under the direction of Rodriguez averaged 27.6 yards per kickoff return, which ranked 10th nationally, and tied for second nationally in kickoffs returned for TDs (2). In 2011, LB Isaiah Carter finished with 54 tackles and was named All-Conference USA honorable mention, for the second-consecutive season.

Rodriguez, who started his playing days with the Miners, ranks in the top-five among UTEP's all-time leading tacklers with 443 career tackles, including 33 TFLs. He led the Western Athletic Conference in tackles in 3-of-4 seasons with the Miners and was named the WAC Defensive Player of the Year following his senior season in 2004, after being credited with 121 tackles and 16 TFLs and was selected to play in the 2005 East/West All-Star Game.

In his professional playing career, Rodriguez spent time with the Carolina Panthers and Tennessee Titans (2005), before playing for Cologne in the NFL Europa (2006) and the Calgary Stampeders of the CFL (2006-07).

A native of El Paso, Texas, Rodriguez was a standout RB at Montwood High School, earning All-City Offensive MVP as a senior. Rodriguez and wife, Holly, have sons, Caleb and Jesse.