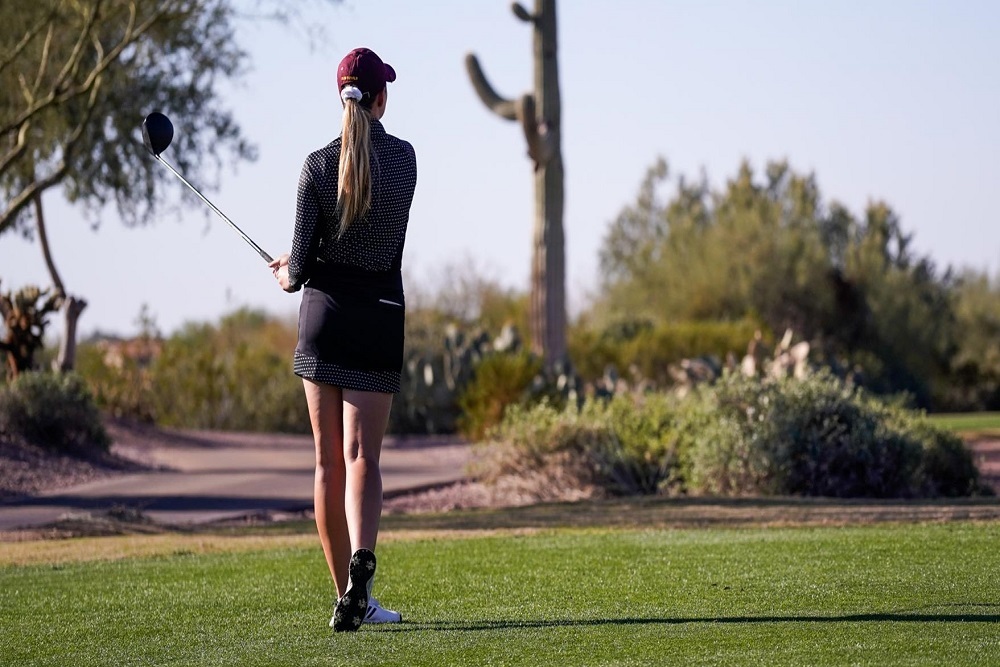 Entering the day in sixth place as a team, the Sun Devils (-1/719) moved up two spots into fourth place by the end of the day. Arizona State (-5/472) put together the second-lowest score of the day, getting stronger as the day progressed despite the physically demanding format.

Freshman Linn Grant (-4/176) continues to play with a poise and maturity beyond her years, as she currently sits in the Top-10. Her second round 67 (-5) was not only tied for the lowest score of the day, it matched a career low. Overall, Grant finished the day at six-under, recording a total of 11 birdies.

The final nine holes of the third round will take place tomorrow, with golfers hitting the course for a mid-afternoon start time. The first Sun Devil tees-off at 1:45 pm MST, with the team looking to continue their climb up the leaderboard.

The signs of a great day were apparent early for Linn Grant, as she embarked on an incredible run to begin her day. She birdied five of her six holes, finishing with a total of six on the front nine. Her back nine was of equal quality, recording three birdies compared to only one bogey. Grant sits in the Top-10 in scoring average on both par four and par five holes, taking advantage of her birdie opportunities. She was off to a good start through the first nine holes of the first round, starting the day off with plenty of confidence.

Olivia Mehaffey improved her second round total by two strokes, helping her maintain a spot just outside the Top-25. She enters the final day in a tie for 26th, looking to regain the form she found at the beginning of the third round. Even after already playing 18 holes, Mehaffey still had enough in the tank to birdie three consecutive holes to start the final round. She has enjoyed success on par five chances, going three-under so far on the tournament.

Raquel Olmos and Alexandra Forsterling each made up ground on the leaderboard, combining to help boost Arizona State's standing on the leaderboard. Olmos was the biggest mover, climbing 14 spots thanks to a strong finish. Through the first nine holes of the third round, Olmos is already two under.

Alexandra Forsterling continues to make her way up the individual standings, moving up seven spots. She carded her second consecutive 74 (+2) in the second round, but rounded into form at the end of the partial third round. Over the first nine holes she finished one-under, including recording birdies on three of her final four holes.

Alessandra Fanali enjoyed similar success on the front nine of the third round, as she played mistake-free over her final eight holes. The sophomore was one of four Sun Devils to to birdie the final hole, as the team ended the day on a high note.

With 27 holes taking place over the course of the day, the Sun Devils had plenty of opportunity to make a move in the team standings. They did exactly that, putting together an excellent round and a half of golf. Arizona State had the second-lowest total on day two, showing improvement throughout. Four of the six Sun Devils finished the front nine of the third round under par, giving the Maroon & Gold significant momentum heading into the final nine holes on Tuesday.

Coach Missy Farr-Kaye's team sits in fourth place, only two strokes back of second. A large factor in the Sun Devils remaining in contention is their play on par four holes, currently boasting the second-best scoring average of any team at the tournament on such opportunities. Arizona State has also taken advantage of par five chances, shooting eight-under in those situations through two and half rounds. The team's 43 birdies are the third-most in the tournament, with 29 of those coming today.

Arizona State will complete nine holes on day three of the IGJA Collegiate Invitational, as they finish the second half of the third round. It will be a mid-afternoon start on hole 10, with a new Sun Devil teeing-off every ten minutes. Here is the order and times the team will begin tomorrow:

Live scoring updates can be found on Golfstat at the following link. For the latest updates and information on the Sun Devil Women's Golf program, follow our Twitter/Instagram accounts (@SunDevilWGolf), like our Facebook page (facebook.com/sundevilwgolf/), and visit our website (thesundevils.com).